First of all, the rules are not new

4 years ago MSUK announced changes to the regulations on fire extinguishers – they wanted to align with the FIA to improve fire safety. To give competitors a chance to use extinguishers they may have just purchased, they gave a transition period.

Rallying requires 2 extinguishers, a Plumbed-in and a Handheld.

The plumbed-in now needs to be FIA approved for rallying.

The handheld needs to be over a minimum size, this size is bigger than before.

For the Plumbed-in system to be FIA approved it needs:

The minimum size of Foam Handhelds has increased from 1/1/22.

If you are using foam (AFFF), they will need to be 2.4 litres minimum, previously this was 1.75 litres.

You do not need to have a foam extinguisher, another popular extinguishant is called Novec1230 (Found in Lifeline’s Zero360 range and PD’s Haylo range). For handhelds containing this, they need to be 2kg minimum. These are proving to be very effective at fighting fires. (Feedback from customers who have saved cars using the Lifeline Zero360 handhelds.)

Dry Powder is now also allowed (Previously it was prohibited, so you couldn’t even carry it in the car). They are very effective at fighting fuel fires, but leave a lot of mess and definitely need servicing to ensure the extinguishant does not settle into a big blob. Minimum size 2kg.

You need at least 1 handheld which complies – so you cannot combine 2 x 1.75 litre handhelds. You can have more than the minimum.

Handhelds are not FIA approved because there is no set test for them – everyone uses them differently.

They can be serviced by anyone, but if you buy one from a motorsport manufacturer I recommend getting them to service the handheld too. The reason for this is they will replace the fluid during the service to ensure maximum capability.

You will notice that Foam is measured in Litres, this is because it is liquid.

The Novec1230 is measured in KG because it is gas.

Powder is measured in KG because it is a solid.

The plumbed-in extinguishers are also available with Foam or Novec1230; the only plumbed-in system I am aware of with powder is the Zero275 system from Lifeline which is aimed at R5/WRC cars.

You can have a different extinguishant in your handheld to your plumbed-in – this is quite a cost effective way of getting great protection. Fior example, you could have a gas plumbed-in system and a foam handheld.

For plumbed-in extinguishers, the simple requirement is the system needs to be FIA approved for rallying. This means:

There are 2 lists of extinguishers that can be used, they are here:

Extinguishers on this list need to have the Rally column ticked

All extinguishers on this list are suitable for stage rallies.

The Technical List 52 indicates extinguishers that have passed a higher standard.

As a service agent, common issues I see which would not comply:

You will notice I have not said the followings:

If the system is on Technical List 51, it does not have a minimum quantity. However, these systems are rare.

MSUK do not stipulate the life of the cylinder.

I hope you found this guide useful – please also check out our buyers guide to extinguishers.


Why can’t I fit a new cylinder to old pipework?

The FIA strive for continual improvement, this is why a manufacturer can only make a system for a set period of time – they want manufacturers to improve their systems.

Manufacturers will develop their nozzles, optimise operating pressures and pipe diameters to get better knockdown capability.

If you fit a new cylinder to pipework and nozzles it is not designed for, then the system will not be as effective as it was designed.


Why do I need to fit all the nozzles?

I have done independent tests showing what happens when the 8-nozzle system from Lifeline was installed incorrectly.

This variation is important. because if the fire is in an area covered by a nozzle which gets least fluid, you have less chance of extinguishing it. 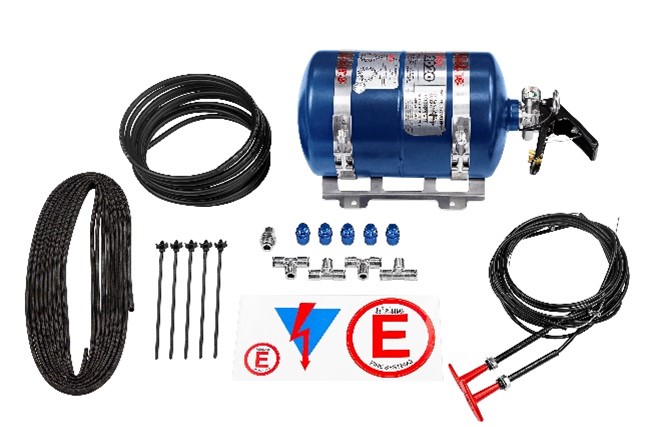 However, I don’t want to shoot myself in the foot – Lifeline have just homologated a foam based system with 5 identical nozzles; 3 in the engine bay and 2 in the cockpit. (See image to the right)

They have used a different type of foam which is a more effective extinguishant, this configuration is meeting the FIA requirements.

I believe this system will be very popular; it contains only 3 litres of foam (Making it smaller and lighter) and it only has 5 nozzles (Making it easier to install).


Why do I need to get it serviced by the manufacturer or their approved agent?

When servicing extinguishers I see the fluid in some beginning to deteriorate. Approved agents will replace the fluid – this ensures it will operate at its peak performance. The only way for the FIA to ensure it has been replaced with the correct fluid is to have the manufacturer or their agents conduct the service.

For example; we add up to 20% of Anti-Freeze during most extinguisher services.

In one instance, I was asked to service one extinguisher that a regular servicing company had attempted. They were unable to get the system to re-pressurise according to the gauge. Having had the relevant training, I knew what the issue would have been; we deal with it in approx. 5% of extinguishers due to the unique challenges motorsport extinguishers face.

Finally, a number of extinguishers require specialist tools to service – these are not widely available.


Why can an approved agent not accept an extinguisher that has been serviced elsewhere?

One of the gas extinguishants used in the better quality systems needs to be frozen and pumped-out during the service.

On one occasion, when the gas was pumped-out into the main holding tank at a major manufacturer it was found to have been changed for another substance. This wasted £1000’s of extinguishant. You can understand why they then insist only the approved agents service the extinguishers.


Why may an agent refuse to service an extinguisher with damage?

Most extinguishers operate between 8bar and 16bar of pressure. If a cylinder is damaged they are most likely to fail when we repressurise them after a service. It is a simple matter of safety why we won’t service a cylinder with damage.


The Technical List 16 says my homologation ended in 2017, can I still use it?

The homologation end date is the last date when a manufacturer can make that extinguisher, it does not mean the system cannot be used after that time.

The manufacturers state the lifespan of their cylinders to maintain their quality. AFFF is corrosive so will often corrode and weaken a cylinder from the inside. The life of the system will be governed by the serviceability of the cylinder by the manufacturer or their agent. 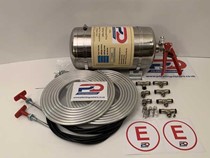 Most systems are allowed to be serviced for up to 10 years, the exception to this is PD (Shown to the right) who use stainless steel cylinders to save weight and achieve a 16 year lifespan.

Why did MSUK make these changes?

We hear a lot of complaints from competitors when they lose a car to fire. However, a lot of competitors bought the cheapest systems available, they never serviced them and they installed them as they thought best/easiest.

By aligning to FIA requirements, MSUK have a specific test which has been passed and specific instructions which Scrutineers can check against.